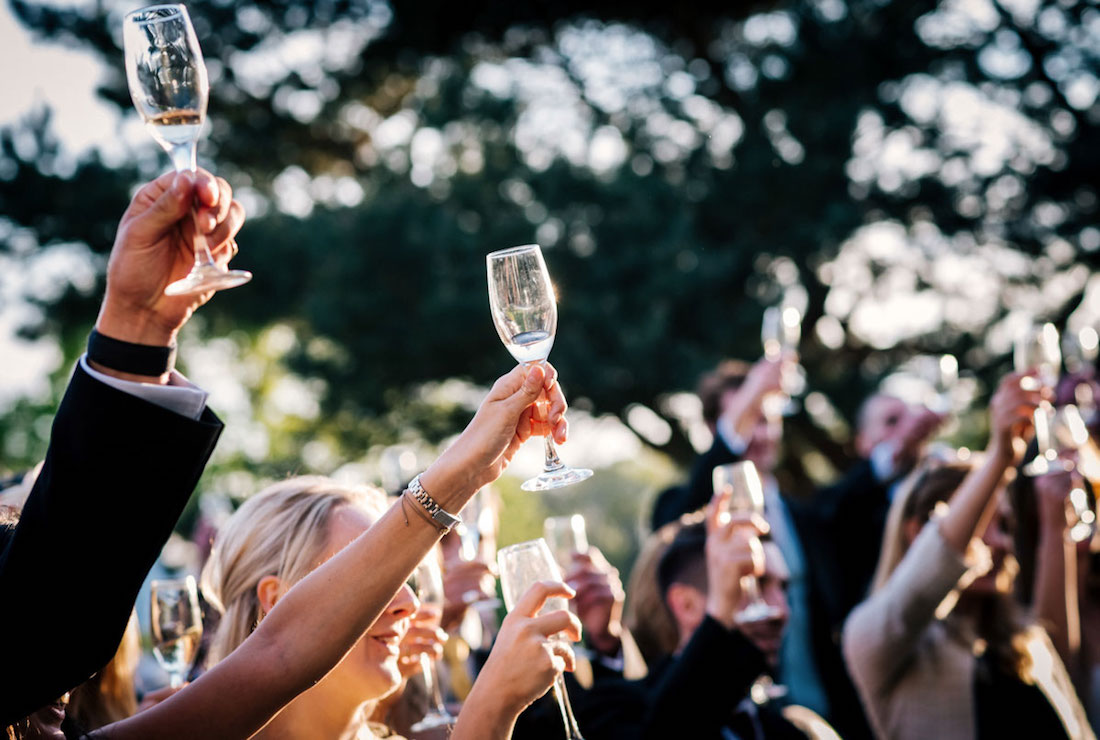 Get an Opening Act

Letting your bridal party members open up the floor is not a bad plan — it gives you a minute to compose yourselves, and you won’t have to deal with waiting for everyone to get settled. Traditionally, the best man serves as the toastmaster, and if the maid of honor chooses to toast, she comes next. After that, the two of you are on. Today many parents choose to toast after the bride and groom, especially if they’re hosting the party. Technically, anyone can join in the fun. Fun? Yes — besides being a lovely gesture of giving something back to those who’ve supported you through countless joys and heartaches (and that was before you became engaged), the bride’s and groom’s toasts can also be a cool moment for you to take it all in, so long as you’re calm and collected.

All eyes will be on you as the bride and groom, but you’ll still need to try to engage your audience. Etiquette expert Jason Tesauro, coauthor with Phineas Mollod of

The Modern Lover: A Playbook for Suitors, Spouses & Ringless Carousers

(Ten Speed Press, 2004), suggests kicking things off with something borrowed. “Using part of a song, poem, or even a bit of the history of toasting as your intro will get the marbles out of your mouth and loosen up your tongue while your guests are still quieting down,” he says. “If they miss anything, no big deal — they weren’t your words anyway.” Anthologies like Bartlett’s Familiar Quotations are great resources to get started, or turn to slightly less conventional sources like popular songs (“as the Beatles say, ‘All you need is love'”) familiar rhymes (“‘Twas the night before the wedding”), or tried-and-true tales (how you met or the proposal story). See our favorite wedding toast quotes.

Mollod suggests starting your speech with a Top 10 list. Not only will it get wedding guests smiling and nodding, it’s also the one thing permissible to read from a sheet. “No matter how nervous you are, anyone can read and be entertaining,” he promises. “Once you’ve made it through your list, you’ve got your perfect transition into the heartfelt thanks.”

Don’t get carried away — while you should speak slowly and clearly, you shouldn’t do so for more than two or three minutes. Less is fine, but more will be excessive (even if it is your day, no one’s expecting a command performance!). In the same vein, keep it simple. It’s nice to tell a quick, illustrative anecdote, but launching into anything too lengthy makes you hard to follow. The story you choose should be general enough for every listener to understand — okay, maybe your four-year-old flower girl won’t get it, yet if everyone else is going to relate they need to get what you’re saying. Leave out any inside jokes or slang (unless it’s in such wide use that everyone will get it): you’re thanking all your guests, so you need to include everyone. Whatever you do, nothing raunchy! Let the myth of the drunken best man toast lie — don’t embarrass anyone (at least not in a mean-spirited way) and nix the four-letter words.

Another potential pratfall? Drinking. It’s a bad idea to get drunk at your own wedding in the first place, but it’s a horrible idea to be drunk while giving your speech. It’s a toast, not a roast — you’re thanking people sincerely. Though public speaking might make you jittery, telling the people you love that you love them should come naturally.

Get Your Speech On

So where do you find all this stuff? While your toast should feel spontaneous and genuine, you aren’t going to suddenly start plucking those Shakespeare and Churchill quotes out of thin air. It’s going to take some rehearsal to appear unrehearsed. You’ll be in front of the friendliest audience possible, and they’ll want to listen to you. Anything that seems overly performed or words you don’t normally use will sound stiff — and might cause you to stumble. On top of that, when the mic gets passed to you, you can’t (or at least shouldn’t) whip out a stack of 3x5s — you’ll need to remember what you’re going to say. Once you’ve sorted out your speech, recite it aloud — a lot. The first few times you do it, find the spots where you stumble or skip words and either delete or rewrite them. As soon as the kinks are worked out, practice, practice, practice! (If you’re worried that last-minute butterflies will leave you with nothing to say, jot down a few key words or phrases on a small piece of paper to stash in your purse or pocket.)

On at least one count, toast-givers are in luck: holding a glass solves the what-to-do-with-your-hands problem right off the bat. Worried you’ll fidget (a big toasting no-no)? “Unless you’re behind a podium, there’s no reason you can’t walk around a bit — just don’t be a Donahue. A little back and forth goes a long way,” Mollod suggests. For assured success, Tesauro recommends planting confederates. “Sure, all eyes are on you, but placing your bridesmaids or groomsmen around the room to give you a thumbs-up that the people in the nosebleed seats can hear you, and to start the applause, will seal the deal,” he says.

When you make your stand, take the time to do a quick mic check too: Tesauro tipped us off to the fact that most microphones are made to sound best at a distance about equal to that between your extended index and pinkie fingers. “Keep your general outline in mind: anecdote-thanks-meaningful quote, and stick to it. This is no time for sloppy improvisation,” Tesauro says. This is also particularly the case with your thank-yous.

Rather than getting into future arguments about who was and was not thanked (or sounding like you’re tearfully clutching an Oscar), keep the thank-yous broad: Mom, Dad, family, brand-new family, friends. And end on a high note. Says Mollod, “Make sure you’ve memorized the last thing you’ll say, so that you can raise your voice and end with a punch. No one will know to raise their glasses if you just trail off.” Do, however, take the time to look around the room and make eye contact with the key players. Says Tesauro, “Letting the impact of your words sink in and having everyone share it creates a great moment.”